The ecology of host-parasite interactions

The main questions I try to answer are:
-What are relationships between parasitism, host fitness, host populations dynamics and ecosystem functinonning?
-What are the role of environmental and genetic variation in explaining variability in resistance, tolerance and virulence?

I work on the dace/Tracheliastes system. Trachaliastes is a non-native ectoparasite in French river systems. We ought to understand the factors affecting the distribution of this non-native parasite, and how climate change may affect its distribution.

The project is funded by the ONEMA , the ANR, the FRB, Biodiversa and the FSBI.

I use the interaction roach/Ligula (see the picture of a parasitized roach on the left) to test how manipulative parasites can affect the functioning of freshwater ecosystems. I combined field and experimental approaches to reach this goal.

This project is partially financed by a CNRS project.

We are running several projects aiming at understanding causes and consequences of intraspecific variability (genetic and phenotypic diversity) in river networks. We also aim at evaluating the effects of global changes (non-native species, climate change, landscape use...) on freshwater ecosystems and more specifically (but not only) fish populations. 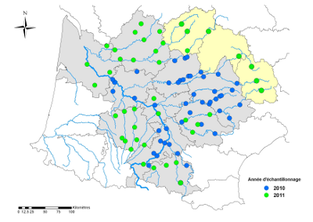 Dendritic networks are complex system driven by strong upstream-downstream constraints. The ecological consequences of these constraints on population dynamics are still poorly understood. Working at the basin scale (the Garonne river basin), we aim at better understanding the processes driving patterns of genetic and phenotypic diversity, and the consequences on population and ecosystem functioning.

These works are funded by the IWRM-NET and the ONEMA 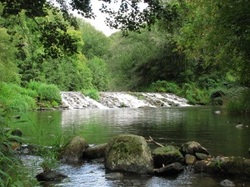 Our applied projects projects are mainly related to the effect of habitat fragmentation (weirs and dams) on the dispersal, genetic and demographic viability of fish populations. We focus on several fish species (cyprinids) to gain insights into the biological features that make a species more or less sensitive to fragmentation, and to propose integrative remediation plans

These researches are funded by the ONEMA.